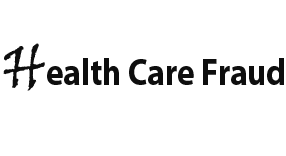 You are here: Home / Blog / Related Information / How the HDC protects the Ministry of Health from being held accountable  ...

The HDC can be held directly responsible for a lot of suffering of mesh victims for omitting to hold medical practitioners to account.

Compare the HDC response to the safety of health consumer recipients of mesh products in New Zealand to that of other countries. The response from New Zealand and the HDC was that they are ‘monitoring complaints’ Conversely, the response from Australia and the UK resulted in Australian Senate / Royal Inquiries and involved contacting all affected patients to gather full information about the extent of the issue.

In 2016, a Government Health Committee asked why didn’t the HDC carry out an inquiry into the effects of surgical mesh? The HDC response was simply that they acknowledged that surgical mesh is an important issue, and that it takes it very seriously.

The HDC took the following action:

The truth is that many New Zealand patients were harmed and some left with crippling heath complications and no treatment support, and blocked from access to ACC because the HDC asked the wrong questions. They should have been prioritising patient safety under the Code of Rights. The HDC should have asked: Are mesh products harming patients? Is patient safety at risk?

The HDC claimed they were protecting consumers, and an d advised that the HDC:

And reducing the incidence of preventable physical injury and death

An HDC ruling provides evidence to the contrary. A patient was blocked from treatment support by an HDC ruling. HDC “It seems that the care you received was in accordance with accepted standards. I accept DR x advice that laparoscopic sacrocolpopexy with synthetic mesh and TVT sling surgery (using mesh) were appropriate operations to perform, are not experimental and have been properly researched and tested” No further action to be taken, and no investigation whatsoever – the complaint was simply whitewashed.

Several years later the product was banned across many countries. A few years later, the UK watchdog released this:

The Department of Health and Social Care will begin conducting a national audit. This will tell them exactly how many women the devices have affected. Thousands of victims claim to have been left on the brink of suicide from mesh.

Today, the HDC still refuses to acknowledge patient safety risks for mesh recipients. Australia, on the other hand:

“TRANSVAGINAL MESH. 22 November, 2016 – Senator Derryn Hinch addresses the Senate https://www.youtube.com/watch?v=itoGIBAX0FY “Suicide is the only option” for these victims to end the pain and transvaginal or pelvic mesh linked to “greatest medical scandal of mothers in Australians history”

The transcript can be found here https://www.openaustralia.org.au/senate/?id=2016-11-22.142.1, which also details more feedback confirming the New Zealand position and the HDC deception presented to the New Zealand Government and covering up the breach of Right 4(1) of the Code of Rights, the right to have services provided in a manner that minimises the potential harm to patients, and optimises quality of life.

Feedback on HDC from mesh sufferers

“Rose Wall (deputy commissioner) told us last October (2016) that they had received ‘very few’ complaints about mesh, particularly about lack of informed consent“

“HDC were a total waste of a year of my life, and took the implanting surgeon’s word over mine. I thought they were there for the patient.”

“I haven’t bothered with them (making a complaint with the HDC). After a very long phone call, the woman on the end of the phone simply told me they were “aware of many complaints”. I said that as I’m so sick I could do without the stress. I told her that DR x had, in actual fact, put a totally different sling in to what he said.. plastic instead of porcine” (He destroyed my notes… but as I request copies of all my letters. I still have my copies) My new UG did a biopsy last December and it is definitely plastic. My rheumy says that while we cannot prove the plastic caused my immune diseases, my body is in constant state of inflammation, which has made me very ill. “

“It just takes energy and when you are suffering from all the mesh complications it’s hard to put in all in writing (HDC complaint). They (the HDC) will protect the surgeon I found“

“They (the HDC) did with me, and that was a year long drawn out thing and then the lawyers got together and I got a crap letter, with so many inconsistencies, but they took the side of the surgeon and (HDC) told him to make sure he gave better informed consent… that idiot is still injuring women every day and hasn’t learnt anything. The HDC should be there for the patient – not be decided amongst HDC and hospital lawyers”

“Absolutely disgusted with the HDC. I know I knew it would be ineffectual, but they have basically told me that I lied. That the retention (even though I had two separate tests in two separate cities with two totally separate set of specialists proving it), the pain – the cutting feeling like something is pulling up in my abdominal and cutting through me, my inability to lie on my tummy as it make that pressured feeling harder – having to buy undies to above the hips because anything around my bellybutton level of waistline gave me horrible cramps – severe cutting feeling – sharp pain when urinating – feeling absolutely exhausted all the time,  was all in my head!”

“They (HDC) trust the Gynes here that blatantly lied, lied about berating me when I said the surgery went wrong, told me that I had ghost pain, told me no scan was possible to see where the mesh was in my body. They were all about ass covering. The HDC trusts them more than me, or the surgeon who actually managed to remove the mesh (or most of it). The fact that I no longer have those symptoms (retention, pain, extreme fatigue, constant infections – still have some but not constantly) means nothing.  A part of me thinks I should not have complained (made a complaint to the HDC). I expected them (HDC) to be ineffectual. I did not expect them to be down right insulting. To tell me that it was in my head”

“I find the New Zealand medical system for complaints procedures toxic. The specialists I have come across have been grossly unprofessional, and colleagues back each other up. There are no consequences. The HDC takes the word of the people you are complaining about rendering it totally ineffectual.

“They should be consulting independent specialists overseas”

“The HDC favours the surgeons as they have lawyers that just argue it out and after 6 pages of lying and an inconsistent story from the implanting surgeon it was basically what the surgeon says is right… Who would want to make up what has happened to us. They are corrupt and a waste of the taxpayers money. I wouldn’t even bother to complain to them again as it a waste of energy that I just don’t have”

“I was told ACC do not police the Doctors – HDC would do that? But in a lot of cases HDC turn us down before they even start to look into the incident”

“I applied for my HDC file: under the Privacy Act: A bombshell. Writing to me saying they were investigating case. And the very same day their ‘internal’ meeting- said, “do not investigate complaint”. HDC lying to me about my valid complaint. They are disgusting. And my ACC case manager then moved to HDC and became my HDC case manager.”

“Anyone else receive a condescending letter from the minister of health today?”

This letter was received from the new Labour Minister of Health: 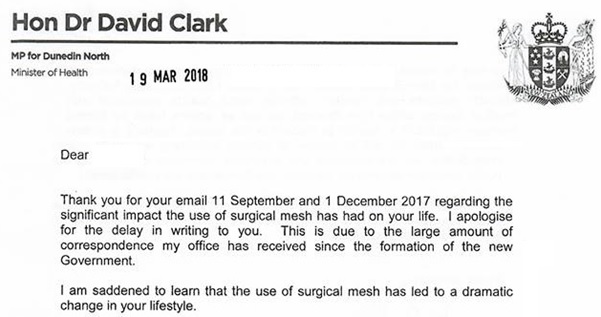 The use of surgical mesh implants is possibly one of the greatest medical scandals and abuses in medical history, and is arguably worse than thalidomide. The existence of health completions as the result of surgical mesh has left patients suicidal and in constant pain. Patients have suffered horrible panful deaths from side effects – described as torture.

The issue with this statement is that health care professionals have been withholding the truth about product defect risks and alternative treatment options Thousands of lawsuits worldwide are in progress as the result of the use of mesh products. Arguably, surgeons are not disclosing the risks because they believe they have the clinical freedom to treat patients as they see fit, under the protection of the HDC.

The Health Minister is refusing to acknowledge the following:

The Minister arguably has knowledge that the complaints process through the HDC is ineffectual. The HDC is in fact operating as a protection service for the Government and ACC rather than its intended statutory function as protector of consumer rights.

Patients have contacted Medsafe several times over several years. The use of mesh has been suspended by many countries through regulations. In this instance, the patient is told to log a new issue with Medsafe.

‘There is no pre-market approval process by Medsafe. Our New Zealand legislation (Medicines Act 1981) does not require medical devices to go through an approval process before being placed on the market. Medsafe does not, therefore, assess information about a device, review clinical trials, review documentation and warnings or perform any other assessment before a medical device can be used. The only requirement is that the sponsor (usually the manufacturer or the importer) must list it electronically on a database (operated by Medsafe) within 30 days of it being first supplied (this is not an assessment or approval). This is unlike other parts of the world (Australia, North America and Europe) where some form of assessment is required before certain medical devices can be marketed.’

Compare this to an Australian Investigation:

The mesh is meant to be chemically inert. Before any implanted device gets clearance from the FDA in the United States, there must be guarantees that it is inert, that it is safe, that it will not change after contact with tissue fluids in the body, that it will not produce allergic reactions, that it will not incite inflammation, will not trigger your immune system, will not harbour and breed bacteria and, crucially, will stay anchored wherever in the body it is installed. Tragically, painfully, dangerously, transvaginal mesh does not pass any of those tests.