Some background on the surgeon’s business model:  During the late 1980’s operative treatment for gallstones were challenged by alternative treatment. Over the past several decades’ nonsurgical treatment of gallbladder stones were evaluated and gained some popularity, these included the following:

This resulted in a marked decrease in surgeries performed because these treatments worked, along with a greater understanding of causes behind Cholecystitis. 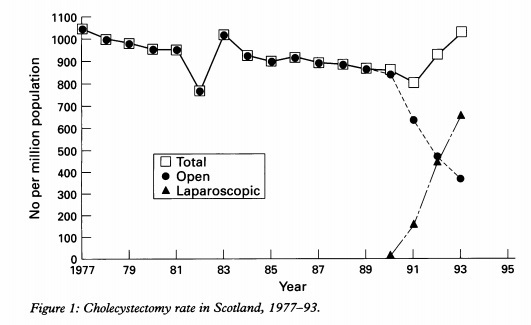 The largest increase (25%) was observed in the 45-64 years age group but it was also particularly evident (19%) in elderly patients (65-74 years). Subjects were more likely to undergo laparoscopic cholecystectomy than open cholecystectomy if they were young and female. The increased cholecystectomy rate observed merits careful scrutiny and health economic evaluation.

One US private practice study revealed cholecystectomies increased 159% following the introduction of laparoscopic cholecystectomy, and went on to say:

“It seems that the use of laparoscopic cholecystectomy, a new technology touted as reducing health care costs, may result in an increased consumption of health care resources due to changes in the indications for gallbladder surgery”. (JAMA. 1993;270:1429-1432″

In other words, the thresholds and criteria for diagnosing surgery were changed to generate income.

The problems of this new surgery procedure was two-fold:

A story was invented and is still in practice today. The following information is seen on all consent forms:

1] The gallbladder is, in fact, an unnecessary vestigial organ (prehistoric) not needed.

2] Once removed, the patient can return to a normal healthy diet and live a normal life.

3] The gallbladder can be removed with no likely side effect risks or digestive problems, as bile is now delivered directly to the stomach.

I.e. BDI risk rates are stated as 1:300 to 1:500 / 03%. But there are many evidence based medical studies stating risks are as high as 1.4%. (7x times higher than disclose rate of risk is a potential law suit of its own if it wasn’t for the HDC much published protection in place)

Note: There is no evidence-based medical study known to mankind backing these patient safety claims presented to patients in order to obtain consent. These are nothing more than dishonest, delusional revenue based fantasies.

Despite the formal recognition and endorsement of ethical principles set forth in the Nuremberg Code and Declaration of Helsinki by Doctors, the institutionalized development of laparoscopic cholecystectomy through leaning on ‘test subjects’ breach ethical, moral and legal standards. This infringement breaching all basic human right was deemed acceptable outcomes in a surgeon’s quest for the entrepreneurial exploration of the procedure, so too were the resulting deaths and serious injuries that followed.

Early in the nationalised experience with laparoscopic cholecystectomy it became apparent that some surgeons who were in the early phases of their training would misidentify the anatomy and inadvertently clip and divide the common bile duct thinking it to be the cystic duct. In many instances this would result in complete obstruction of the common bile duct, which would require a second operation to correct.

Bile Duct Injury reached epic levels as high of 15% (USA figures).  These risks were never disclosed to new patients during the informed consent process.  Surgeons training requirements were priority and patient injury was an acceptable outcome.   Surgeons called this ‘development with patient partnership’ This did not reflect well for some doctors as the ethical principle of autonomy which protects patient self-determination goes hand in hand with truth telling. Many spoke out both publicly and in medical journals of their concerns

One study  “Impaired Quality of Life 5 Years After Bile Duct Injury During Laparoscopic Cholecystectomy: A Prospective Analysis” exposed the long term risk to health with BDI as being, conclusion: Despite the excellent functional outcome after repair, the occurrence of a BDI has a great impact on the patient’s physical and mental QOL, even at long-term follow-up. One discussion feedback exposes cold ethical truth. Prof. A. Johnson: I too found these data fascinating. I think the two key questions are: What were the patients told before they had the operation in the first place? Were they warned about bile duct damage? And goes on to ask What should we tell patients if they should have the misfortune to have their bile ducts damaged?

Other problems have also been identified to occur following laparoscopic cholecystectomy. This includes entering the gall bladder and spilling stones and bile into the peritoneal cavity, failure to diagnose stones in the common bile duct, cystic duct clips falling off leading to bile peritonitis, holes being poked in the cystic dust while doing x-rays of the biliary tree (cholangiography), holes poked into the intestine or mesentery by either the needle used to fill the peritoneum with CO2 (Verness needle) or one of the trocars used to introduce the ports.